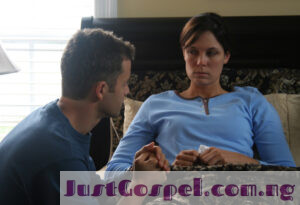 On the pinnacle of divorce, Catherine wouldn’t desire anything to do with Caleb her husband, not until Caleb’s father urges Caleb to try unconditional love for 40 days, despite her resistance.

Catherine confronts Caleb after finding her Love Dare journal and he tells her that he has completed the challenge but is still following his instructions. Despite Caleb’s heartfelt apology, Catherine says she still needs time to reconsider the divorce. Until God touches her heart and boom! they are together again as a better refined family after the duo received Jesus to their home.

Want your Content added on JustGospel? Upload Your Song.
More On
About Author
Written by: John Godwin
John Ovye Godwin is an Evangelist, Full stack developer and a passionate blogger, he loves praying, preaching, listening to gospel songs & chants, doing research and also a lover of God, He currently resides in Lafia, Nigeria.